A girl comes of age and acknowledges her sexuality in Toy Styles’ debut novel, RAINBOW HEART: YOU HAVE NO CONTROL OVER WHAT THE HEART DECIDES. This saga stars Evelyn Kelly, and her quest to love herself enough to be who she is.

At the novel’s start, Evelyn is 13 years old. Her world revolves around her crew that includes younger sister Tammy and friends Kiesha, Tiffany, and May. The girls share their lives and troubles at home, always leaning on each other for support. As the fivesome grow up in their Washington, D. C. neighborhood, they each have trials of their own. Sisters Kiesha and Tiffany live with a crackhead mother, while May endures sexually abusive father. Evelyn and Tammy have the best home life, being raised by their overbearing but loving mother.

But as close as the girls are, Evelyn has always felt different. Evelyn’s not quite like the other girls, with their crushes on boys. This is evident from the first chapter as her sister teases her constantly about not having a boyfriend. She’s never had one, and doesn’t want one.

She’s only comfortable around her girlfriends, especially May. The two share a special bond that no one, even jealous sister Tammy can break. Evelyn adores May, and they have this special connection. Although she doesn’t know what it is, Evelyn feels a deeper love for her that she can’t explain. Things turn sad for them, though, when Evelyn has to move from D. C. to Texas They lose touch after a while, and she is simply heartbroken. She never stops thinking about her, even when the story fast forwards 10 years later.

At 23, Evelyn is seriously dating Antwan, or at least Antwan is serious about her. Evelyn’s not so sure she’s in love. She feels something isn’t right between them. Antwan doesn’t have a clue as he’s ready to propose marriage.

By this time, Evelyn has a new best friend and roommate, Six, who’s gay. She confesses this to her, and the two enter a secret relationship. This is enough for Evelyn to know she’s gay – and that she has to break it off with Antwan.

No better place to out yourself than your own birthday party. After her sister Tammy manages to bring all of the fivesome back to surprise her, including May, it gives a bold Evelyn the courage to announce to family and friends her true self. Does her family accept her? Will she get back with May, and what about Six…and Antwan? Evelyn doesn’t have all the answers, and author Styles plans to answer them in the next two books in this trilogy.

All in all, Rainbow Heart is a novel that keeps your attention. Toy Styles is a great storyteller, but the grammatical errors do take away from the story. But that aside, you will want to know what happens next-and to see exactly where Evelyn’s heart takes her.

If you’re not one for short story collections, FOR NIGHTS LIKE THIS ONE: STORIES OF LOVING WOMEN will change your mind. Becky Birtha’s affectionate stories featuring lesbians from all walks of life were touching, intelligent and insightful. Birtha knows how to keep the cohesiveness of the tales, while making each one fresh and distinctive.

The book is composed of 13 novellas all about lesbian love. Although the work was published in 1983, its simple themes still transcend to contemporary times. Sexual identity, same-sex parenting, race and and monogamy were issues Birtha addressed with candor and could be heard today in any lesbian relationship. Nothing she wrote seems outdated.

In the first story, two tripped out women get a rude awakening by a dude who detests their love in “It Was Over Then.” Lurie and Sabra discuss raising children in “Babies,” while Edna is intrigued by “Marissa,” the new radical black teacher at her workplace. “Next Saturday” finds a Julliard teacher pining away for her student, Kacey, who reminds her of her own coming out experience.

“A Sense of Loss” could be the most relatable story to black lesbians because its theme of hidden identity. The narrator, Liz, returns home to attend her grandmother’s funeral, where she feels out of place. No one knows she’s a lesbian (except her sister), and she feels like a hypocrite for not being herself around her own family. Liz has a lover back home, a woman she could never bring home to mama. But there was one person who always knew her heart: Grandma. It’s not until Liz is back home with her true family, her lover Mandy, that she can truly grieve her loss–her grandmother and her own isolation from her real family.

Julia and Gina think clothes make the lesbian in “Leftovers,” and Emily realizes nothing compares to being with the one you love in “A Monogamy Story.” Brownwyn holds onto a loved one’s ring for “Safekeeping.” Ellen doesn’t like her lover’s ex-girlfriend and her obtrusive presence in “A Four-Sided Figure,” while in the title story, a woman daydreams about a perfect lover–until she finds the real thing.

The last three tales deal with acceptance. Jessica let her pride keep her from loving “The Woman Who Loved Dancing”; black woman Francie has to accept whom she really is and the love of her white best friend; and Sojourner realizes no one knows her better than lover Sierra, not even herself.

Birtha’s connection with all these tales is one of true love and all the forms it takes between women. We have the capacity to love freely and compassionately and that resonates with these stories.

Birtha’s writing in For Nights Like This One was poetic yet simplistic in its traditional themes-every woman, black or white, could relate.

Remember what it was like having your first crush on a girl, that delicious sensation of something sweet and forbidden, but tingling with anticipation of doing it again?

That feeling is captured in Jacqueline Woodson’s tender novel, THE HOUSE YOU PASS ON THE WAY. Evangeline “Staggerlee” Canan, the 14-year-old biracial protagonist of this tale, deals with her true feelings when her cousin, Trout, comes to visit.

Before Trout’s arrival, Staggerlee’s life is filled with longing. Despite being surrounded by a loving family, she’s lonely and doesn’t have many friends. She does grow close to new classmate Hazel, whom she kisses in between the cornflowers, but that soon fades once Hazel discovers Staggerlee’s tragic family past.

Before her parents married, Staggerlee’s grandparents were killed by a car bomb. Both famous entertainers, they were immortalized in her small town of Sweet Gum. Because of it–and her parents being an interracial couple–people look at Staggerlee and her family differently. They assume she’s stuck up and treat her as an outcast.

Everything changes when Trout comes to Sweet Gum. Staggerlee’s never met her 15-year-old cousin. But when she does, she’s taken aback by Trout’s beauty and presence. Trout’s a little pensive at first, but the more the two spend time together, they learn they have a lot more in common. They share a love girls, both having had their first same-sex crushes. Because of this connection, their bond evolves into a deep friendship. Staggerlee has found somebody who truly knows how she feels. She realizes that her feelings for girls are real and valid.

Woodson is a truly gifted writer to craft, The House You Pass on the Way, a beautiful novel about a girl’s search for self. Not only did it showcase a young woman’s budding sexuality, but highlighted the unconditional love of a family. One can truly say this novel takes you back to the past when love was fresh and new and innocent. 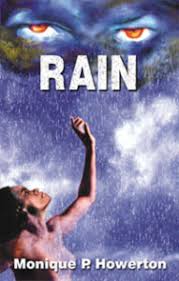 Right in time for Halloween comes a book that combines the afterlife, black lesbianism, romance and the gay family. It’s here, all combined in Monique P. Howerton’s supernatural story, RAIN.

Rain is the tale of Monica Walker and her unrequited love (or so we think) for Pia, a woman who stole her heart when she was 16 years old. Monica was introduced to Pia and her extended “family,” but the two women had this connection, a deep affinity for each other, not withstanding a fantastic sexual attraction. Lovers for years, everything changed when Teri steps into the picture.

Monica and Pia loved each other, but Pia, being older and wiser, thought it could never work with someone so young and innocent to the world. So she finds love with Teri, a womanizing stud who couldn’t remain monogamous to save her life–literally. It’s because of her infidelity that she and Pia both contract AIDS. All the while Monica stands by and knows she could give Pia a better life. Monica has done everything she could to make Pia see that they are soulmates; Pia does realize it–when it’s too late; her fear simply kept her from knowing an unconditional love.

The constant rain described in the novel, almost a character itself, was a metaphor for the sadness and drama that ensued.

Here’s where the supernatural part comes in. Monica, who grew up with supernatural powers, fights to protect Pia’s soul from evil forces that come for her. If you’re into supernatural fiction tales, then this part will grab you. If you don’t believe in the afterlife, you will just read it for what it is.

Howerton’s writing is unique, despite the grammatical errors. Rain is quick read, but the story does use a reverse plotting element, flopping from the past to the present, and you will sometimes find yourself trying to figure out what’s exactly taking place at times. Elements are revealed as the story progresses, but in the beginning, names and details are mentioned without much explanation. But Howerton does deliver a different type of story–and that’s always to be applauded.

I wanted to give UNDERCOVER five stars. I really did.

After all, she is the author of Fire & Brimstone, a great lesbian novel for today’s generation. The drama that ensued in that book was simply off the chain! Chris and Gayle kept it real.

Undercover is another story. This sequel of sorts continues with Chris, with even more drama this time, and has enough characters and twists to keep your attention. Yet what kept it from being a 5-star review was simply the timeline of the plot. There were times the plot jumps from one year to another with any transition to know what was going on. Some parts were cohesive, others came out of place.

But despite that, I still resumed my infatuation with Chris, the intelligent, determined woman confident in her sexuality. She reintroduces old friends like Rudy and Gayle, with whom Chris finally makes peace with, while presenting new faces, like Amil and Nathaniel.

This time around, Chris has gotten herself involved in an online affair with Amil, a doctor engaged to a successful entrepreneur. The ladies began with a friendship that turned into something more even without having met. Chris has a feeling it’ll never work, as her instincts warn her that Amil will never leave Manney and the comfortable life they’ve made. Only in a chance business meeting do they finally see each other face to face–and the fireworks begin.

Iyesha, Chris’ sister, has problems of her own. Lil sis is married to Nathaniel, a former drag queen who gave up the life after his lover Patrick leaves him for the Lord. The two become friends after his glorious heyday (or gayday), slowly falling into a relationship. In the beginning of their marriage, Nathaniel has convinced himself to become a heterosexual, faithful husband. He tries to be what Iyesha wants for a while. Pretty soon, though, he’s back to his former life (on the down low), and their marriage is never the same.

Every character’s life intertwines in this enjoyable novel about love and self-acceptance. Chris definitely has come a long way from the chaos of Fire & Brimstone.