The Plot: In James Tanner’s MY GIRL GOT A GIRLFRIEND, main character Dontaye, a hustler born from a lesbian pimp and a gay male prostitute, capitalizes on studs and femmes by creating a lesbian brothel. There female customers can purchase illicit services from other women. It earns Dontaye money and respect in the game, something his hard-nosed mother preached to her ambitious son. Meanwhile, Dontaye falls hard for Envy, who’s shadier than a mighty oak in the summertime. Too bad he didn’t listen to Mama about women, because the young pimp finally met his match.

The Good: Not too much was great about My Girl. The sex scenes did generate slight heat; the story moves swiftly. The way it ends, there’s bound to be a sequel.

The Not-So-Good: Where do I begin? Like I said, the sex between women was okay, but repetitive in action. The entire story was narrated by Dontaye, which allowed me to get only in his head; I didn’t care for the view. While he spoils his female employees with material things, these women were sex objects to him; he saw them as a means to success and respect. Not only that, there was nothing captivating about Dontaye; at times, he was mad corny.

The Bottom Line: My Girl Got a Girlfriend is best suited to someone who enjoys unconvincing street lit. Tis all.

When Serenity arrives for her first year of college, she knew she would discover an entirely new world – what she didn’t expect to find was drama and murder.

And it all began when she unlocked her hidden lesbian fantasies in BI-CURIOUS, the first book in the series by Natalie Weber.

Serenity wants to whet her appetite for women, and college seems like the best place to discover what her older sister, Carla, has always known as a stud. Her guardian since their mother passed away, Carla would never let anything happen to her baby sister.

But her sister is not there to protect her when Serenity’s curiosity lands her in the trap of the hottest stud on campus: Sadie Smith. She’s the one that ladies – gay or straight — want in their beds, and the dude that other dudes envy. Her wealth makes her stand out, and her parties are legendary. Never without a woman, Sadie is determined to add Serenity to her stable of beauties. And what Sadie wants, she gets.

Soon, Serenity is plunged into a world of sex, drugs, and possessiveness…all courtesy of Sadie. She has a hold over Serenity that leads her down the wrong path, to the point it’s affecting her studies and her relationship with Carla. When she tries to leave, Sadie’s manipulations lead her back. Can Serenity escape the dangerous web Sadie has spun around her before she gets hurt?

In other words: chile, love is crazy. Nothing says this better than ROSE FROM THE BAYOU, the bewitching novel from Teryn Williams, also the author of Be the Sun Again.

Set in 1990s New Orleans, the story follows the friendship of Scarlet Rose Laveau and Koral Baptiste. Soul sisters and neighbors since childhood, the women are now 24 and long-time lovers. Their relationship is deeply befuddling, especially to their families. Whereas Koral is sensitive and loving, Scarlet is cold and selfish. Her practices in what some folks call voodoo or black magic, passed down from her mother’s side of the family, constantly label her a bad seed.

Scarlet relishes her otherworldly abilities, channeling spirits and cavorting with the afterlife, which makes her an asset to people who need her assistance. But she what she uses for good, she also exploits to her advantage. Scarlet is a hedonist with a cause.

“My appetite was fierce and something not of this world. I was not born to be slaved beneath a relationship. I wanted to love freely. Love has no face and love had no color and love was androgynous. Or maybe I was speaking of sex because my heart was a deep dark hole that I often searched for a feeling but there was nothing but space looking for more of that same feeling. A space big enough to hold whatever and whomever I wanted to occupy it.”

However, Koral is the solitary soul she allows into her realm, mostly because Scarlet knows she has Koral’s heart on a string. She dominates the dark-skinned beauty, and because Koral doesn’t know her worth, she lets Scarlet control her. Talks her into doing heinous things, anything to keep Scarlet’s love and attention. Besides her grandmother, Nana, Scarlet is the only family Koral has. Their connection is powerful, and Koral wants nothing more than Scarlet’s “undying” love. With the thoughts Scarlet has, that could be the only way for Koral to win her heart.

Koral should be careful what she wishes – she might just get it.

Rose from the Bayou is one of those books with rich character development that pulls you in. You will either find yourself loving and/or hating Scarlet and Koral and the eccentric personalities in this book. Williams’ book could use more editing, but if you’re into dark stories, Rose will be a book that’s just as sweet. 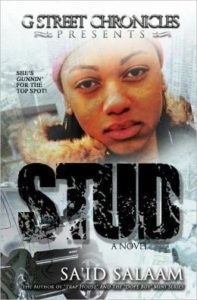 What we know as a masculine lesbian takes on an entirely different definition in STUD, the book from street lit author Sa’id Salaam.

Stud apparently has many descriptions, but Salaam portrays protagonist Andrea “Dre” Coleman as a drug-dealing, gun-toting young woman with an identity crisis.

It wasn’t always this way, though.

Tomboy Dre never wanted to wear pink or ribbons. Dressing like a boy for protection, she emulates her hustling older brother, Bernard, and prefers beating up the boys and playing lookout for big bro. Bernard is her hero, and when her brother is killed, it’s up to Dre to take over the game in Bernard’s honor.

Easier said than done. Dre finds it hard to gain respect when you’re a girl filling in bigger shoes.

Luckily, Dre’s best friend Ramel, is her partner-in-crime. The two make a great pair, and when things get rough, or somebody needs to become a nobody, Ramel is in the trenches with her. Doing the kind of work they do, it bonds them without many words being said.

This attraction between Dre and Ramel is what throws the reader completely off when reading Stud. You’ve been introduced to Dre the stud and her romps with women, but you end up knowing Dre the bisexual. And if that’s what she wants to be, that’s fine. But the book’s title seems misleading. Was the author trying sending a message or creating a confusing character for entertainment value?

As entertaining as it may be, it’s also a head-scratcher. What Stud has in its corner is that the writing is decent, and some may like this urban tale. But what Salaam is writing about brings about the issue of what defines a stud. Do clothes or attitude make a stud, or is it a combination? Who’s to say what a stud is?

Sadly, you won’t find out by reading Stud.