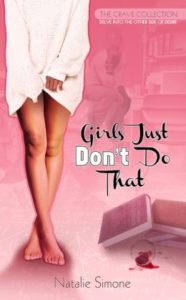 Girls Just Don’t Do That by Natalie Simone is one of those books that grabbed me the first page. Published in 2009, the college-themed love story is filled with characters that I would have hung out with in my 20s (and probably did). Simone also nailed the stud/femme dynamic to a tee. (Read the Sistahs on the Shelf review of Girls.)

In 2014, Girls Just Don’t Do That has gotten a facelift, and is now the first book in the newly-minted CRAVE trilogy. Three Degrees of Separation, the second book, will be available in May, featuring a now out-of-college Jayne and a new circle of women.

In anticipation of her newest book in the CRAVE trilogy, Natalie Simone would like to bestow 5 lucky winners an autographed copy of her book, Girls Just Don’t Do That! To enter, please fill out the form below.

In the meantime, watch Simone’s video preview of Girls Just Don’t Do That.

First things first, can we just admire the beauty that is this book cover? Gorgeous.

With that done, let’s get down to the beauty that’s in La Toya Hankins’s newest novel, K-RHO: THE SWEET TASTE OF SISTERHOOD. Hankins, the author of SBF Seeking, has done it again, creating a moving story about an unbreakable bond between sorority sisters pledging Kappa Alpha Rho.

The premise is simple, but the enduring friendship is anything but. It’s a kinship built amongst three diverse Copper Road University sophomores who on the surface don’t have much in common, who probably wouldn’t have even been friends otherwise, but connect from enduring on the same line, commiserating their relationships, and growing through their college experiences in the 1990s and adulthood 10 years later.

And to think it all began by an invitation in a heavy purple linen envelope one cold February evening. From that first interest meeting, Kiara, Gloria and Donna clicked and became inseparable.

The anchor of the group is Kiara, a legacy considered a shoo-in to be a K-Rho swan. Practically groomed for membership since birth, the business major knows all the answers and passes all the trials with flying purple and platinum colors, but she harbors a secret that could end her bid for joining the sisterhood. They don’t know her lover Chris is a she – not a he – and Kiara questions whether they would accept her otherwise.

Gloria, the liberated brainiac, always has a saying, a random fact, or a long-winded explanation as the voice of reason between the trio. On full scholarship and living in the honors dorm, she’s cerebral but down-to-earth and open to more experiences than the other two girls, including being down with the swirl. Beneath that adventurous attitude lies a woman who wants to be stepped to the right way. She doesn’t settle – and her high standards could be her downfall.

Now, Donna…this girl, the daughter of a deaconess and a Marine, won my heart. She’s the sister that could offer you with a Bible-quote in a heartbeat, but would beat your ass and ask questions last if you messed with her man. The curvy beauty lives (and fights) for Peter, who’s a player on and off the football field. As a strong as she appears to be, there’s a soft spot she has for Peter that even her sisters can’t seem to sway her from. And trust me, they’ve tried.

Crossing over, even with all that going on, was an accomplishment the girls held in high regard, and cemented their friendship through college and one tragic incident that set a slightly darker tone for the remainder of the book.

Ten years later, the girls are balancing relationships, children and careers. Kiara is still devoting her every waking hour to K-Rho at her partner’s expense; Gloria is tired of letting love find her – and of being alone. Donna is the most transformed, now a mother to Peter’s children and settled in domesticity.

This second half of K-Rho doesn’t hold as much fun as the beginning when they were fancy-free co-eds, enjoying Greek parties and gossiping about who was zooming who. However, I do think they become fuller, mature characters. I enjoyed their interactions with each other, mostly between Kiara and Donna, who are my favorite women in K-Rho. The “lesbian” and the “Bible-thumper” understood each other in ways that show best friends don’t have to do anything but love and accept each other for whom they are. Hankins shows this time and time again between Donna, Kiara, and Gloria.

I did have a couple of qualms about the night of the “incident,” in that I thought it was of out of character for one of the women to even be in that situation. I also kind of hoped Hankins would have delved into skin-color issues in African-American sorority life, but that’s just my wishful thinking.

Hankins, a Zeta Phi Beta member since undergrad, writes authentically in K-Rho. She exhibits talent in writing what the sorority experience is like, most especially as a lesbian in an alliance of women who may not always accept you – despite wearing the same colors.

But despite it all, Kiara, Gloria and Donna can’t be, won’t be stopped.

So at Hankin’s capable hands, sisterhood does taste quite good.

Her ex-fiancé, Anya Prye, is pulling out all the stops to win her back.

But six months ago, Cherry was blindsided by Anya’s admission that things were moving too fast – four months before they were scheduled to be married. After two years, she knew their relationship was headed to for better or worse, and the worst happened: Anya became the stud she had to get over.

Fast forward to present day, and 27-year-old Cherry is almost whole. Yet with one one out of the blue phone call comes Anya confessing her mistake in leaving Cherry. She’s back in Boston determined to assuage the pain left by her abrupt departure, and will do anything to have Cherry as her wife.

Told in the lovers’ alternating voices, this is where Tastes Like Cherry becomes a merry-go-round of emotion. I’ll say this: some women might be flattered by an ex stealing her heart again, especially if the torch was never really extinguished between them. She’s the one who never faded completely from that woman’s heart, continuing to be at home in those crevices and cracks. For Cherry, even with anger still brimming, Anya is that woman.

And Anya knows what she lost. Cherry is a catch. The criminal justice professor woos and works Cherry’s body like no one else, as proven by the stirring encounters Cronin writes with sensuous strokes. But Anya suffers from the “water runs dry” syndrome, and Cherry has to decide whether love can truly be rekindled with someone who broke your spirit in a million pieces.

And it’s not as if Cherry doesn’t have other options or distractions. There’s a co-worker whom she finds adorable, and a night out with homegirls gives her the chance to meet a couple of promising new love interests. Her work as a clinician gives her life meaning. And her friends provide her laughs and opportunities to dance all night, one of Cherry’s favorite hobbies.

Just like Cherry, though, I got caught up in Anya’s admissions of guilt. Every love scene had me rooting for a happy ever after, and every tear they shed made me second guess whether these two can make it last.

I really enjoyed both Cherry and Anya as realistic characters in a typical romantic quandry. While some subplots weren’t tied up enough for me, Cronin has a fresh voice as a writer, and when her sequel to Tastes Like Cherry arrives, I’ll want to see where Cherry and Anya go from here.

When I first read S. Stephens Am I My Sister’s Keeper in 2005, like Elise, I was going through my own coming out conundrum. I was gay, living with my parents, and taking shelter in my closet. So Elise’s story – attempting to please her parents while struggling with her sexuality – spoke to me in a lot of ways.

Now, eight years later, both Elise and I have faced our demons, but in BETWEEN RIGHT AND WRONG, Elise is still taking on the woes of her family and friends. She allows her sister Lynn to live in her spacious Miami home to get her life in order; provides the always sympathetic ear to best friend, Carmen, a skyrocketing recording artist; and fights to keep her guy pal Wade sane while he goes through some pretty serious legal issues.

At the same time, Elise’s love life is just as hectic, as she falls back in stride with ex Symphony (her biggest hurdle in the previous novel) and cultivates a fling with an extremely sexy older woman, not to mention the simmering feelings she has for married friend Monica, whose unconditional love held Elise’s through every traumatic event.

With all this love in her life, as well as a successful career in high-end real estate, it would appear her life is flawless at 32. Yet here’s Elise’s biggest issue: Elise will do anything for the people she loves, but it always seems to be at the expense of finding romantic love. In Wrong, I saw Elise fluctuate from crisis to crisis, from woman to woman, and it’s so clear that she can’t trust her heart with anyone. I love that she’s so committed to her family, both immediate and extended, but she hides behind them to escape the love she knows she deserves. I found Elise’s life full but slightly dizzying.

The strength of Wrong is in its cast of characters. I really got to know her extended family all over again, and their loyalty to Elise is commendable. What I love most about them is that they will always tell Elise is the truth, even when headstrong Elise doesn’t want to hear it, because that’s what family does. And each character’s romantic woes – reexamining one’s sexuality, sacrificing one’s to get ahead careerwise – is another fire for Elise to put out, which is a huge chunk of Wrong‘s plot. It also moves the book along to a dramatic finish.

Can I say Elise James has grown in the eight years since Sister’s Keeper? I think she knows what love is – she sees it in all forms in Wrong –  yet making it happen and making decisions about who’s best for her aren’t her strongest suits. And even with her devotion to everyone else, she always looks out for self. Nothing wrong with that, per se, but best friend Carmen hit the nail on the head when she told Elise, “There’s this person in you that walks on water, then there’s this other person in you that can move like a snake. Sometimes I don’t think you know right from wrong.” She’s not perfect – no one is.

Somehow I think Elise will get it together, though. Either that or I’m expecting another novel from Ms. Stephens.