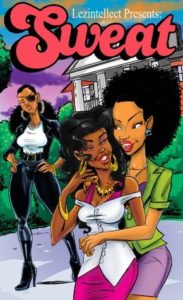 The Plot: SWEAT: CHAPTER ONE introduces twins Odessa, a womanizing, prodigal daughter of sorts and Olivia, the responsible older sister (by two minutes) who’s been running their father’s successful hair care empire while Odessa is away in the Big Apple. She’s returned home to her family’s sprawling home and decides as usual she wants what she wants without a thought to what’s been happening while she’s gone. If she had only made a phone call or two, she would have discovered that Olivia has been taking care of things just fine in Atlanta.

The Good: Author LezIntellect makes it clear this first installment of Sweat is just the beginning. She has way more in mind for her characters; she promises Chapter Two will bring someone “dynamic.” She also knows a thing or two about how to write a descriptive setting and how to give her characters great backstories (even if we don’t know everything just yet), which makes me captived with Odessa and Olivia. And I love the cover artwork.

The Not-So-Good: Sweat‘s sentence structures can be a little redundant, but I have a (kind of) bigger issue. The thing about soap operas: every time you get closer to the truth, in comes a commercial. That’s how I felt when I got to the end of Sweat. Waiting chapter by chapter is going to be the death of me. *cue death music* *cut to commercial*

The Bottom Line: I have to know what happens next. I guess there’s a reason LezIntellect calls it Sweat.

One thought to “Sweat: Chapter One (A Lesbian Soap Opera) by LezIntellect”