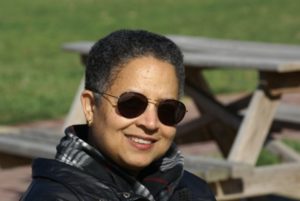 IN RENEE’S OWN WORDS…I am a native of Philadelphia and I live in a small suburban community with my life partner. I’ve reached my fifth decade, and a year ago I made a career transition from teaching Spanish and French full time in a Philadelphia public high school to working part time with student teachers at a local university and writing as much as possible. I remain grateful for my life, for the friends whose encouragement has sustained me and for the existence of the SOTS website and their readership. My website is up and running at www.reneebess.com. I can be reached at Levrb1@aol.com.

How long have you been writing and how did you get started?
I’ve been writing ever since I was a teenager. I began by writing poetry, then I moved on to short fiction. After many years of off and on writing, I won first prize in a short fiction contest sponsored by Labyrinth, a feminist newspaper that was published in Philadelphia. A few years after that, two of my short stories were published in Piece of My Heart (A lesbian of colour anthology), 1991, and Ma-Ka Diasporic Juks: Contemporary Writings by Queers of African Descent, 1997. Both of these anthologies were published by Sister Vision Press in Toronto, Canada. I probably started writing because I was an avid reader with a fertile imagination.

Give a brief synopsis of Leave of Absence.
Leave of Absence is the story of a small group of women, some African-American and some not, some lesbian and some not, who have bonded together through their work at the fictitious Allerton University. Within this group of diverse characters are Corey Lomax, who is recovering from the betrayal of her ex-lover Jennifer Renfrew, and the writer-teacher, Kinshasa Jordan, who is fleeing an abusive relationship and accepting the university’s invitation to be its writer-in-residence. Both Corey and Kinshasa are hell bent on avoiding any romantic entanglements as they go about their lives balancing the joys and rigors of “TAAWUWBBAL” (teaching at a white university while being black and lesbian). As the plot unfolds, so do secrets, relationships and desires.

Describe the man character, Kinshasa Jordan. Is she similar to you in any way?
Kinshasa is a talented, fundamentally shy and self-protective jewel of a woman. Although she found the courage to escape from an abusive situation, she is not fully convinced that she deserves to be loved by someone who cherishes her. Fear and a lack of confidence combined with the ingrained notion that she is simply “not enough,” motivate her responses and actions. Kinshasa and I share some traits, but as I developed the characters, I felt more of an affinity toward Corey Lomax.

Leave of Absence has some colorful female characters. How did you create them? Are they portrayals of people you know?
The characters contain bits and pieces of a lot of people that I know. I suppose that their creation began with my sense of them as physical beings. I pictured what they looked like. Then their personalities and emotional make-ups simply evolved.

The romance between Kinshasa and Corey developed slowly, with a lot of thought. Was that the intention with your book?
It was definitely my intention. They are both deliberate woman, devoted to protecting themselves emotionally. Neither one is a “hit-it-and-run” type of person.

Are these characters you will revisit in another book?
Yes indeed! After spending ten years with these women, I cannot abandon them.

It was interesting when character Simone said, “Lesbians don’t really exist for most of these people. We’re just a social and political construct. We just think we’re attracted to women because the pool of eligible black men is so limited, what with HIV/AIDS, drugs, jail and brothers on the down low.” Do you believe there’s some truth to that?
Absolutely not. But I do think that some straight people believe it. Perhaps it’s their denial mechanism at work. The notion that one’s sexuality is determined by the economic theory of supply and demand (of eligible black men) is just plain simple minded, in my view. In the novel, Simone is expressing another way in which she feels invisible, marginalized and unknown in her work environment. This is a feeling that many African-American lesbians experience even when we self-disclose our sexuality and when our ethnicity is as plain as day.

Your bio states that “for years you have wanted to be a writer who teaches, instead of a teacher who writes.” How has that transition been for you?
In three words, it’s been “smooth and wonderful.” At last, I have time to write!

What are you working on next?
I’m working on my second novel, another African-America lesbian romance. This time, my main character navigates her way through a tough familial situation, only to find that her attraction to another woman forces her to confront class differences that have existed for generations and kept
people of color apart from each other.

Who are your favorite authors? Favorite books?
Some of my favorites are: Sula by Toni Morrison; Black Ice by Lorene Cary; For Nights Like This One by Becky Birtha; To Kill a Mockingbird by Harper Lee; Cooking with Grease, Stirring the Pots in America by Donna Brazile (non-fiction) and a new and enjoyable one, Bliss by Fiona Zedde.

Where do you see yourself in 10 years?
I see myself continuing to write fiction. Now here’s the fantasy part…I see myself being able to watch the two or three DVDs of films that were based upon my novels, directed by Cheryl Dunye, Angela Robinson or Yvonne Welbon, and all starring Ion Overman, who portrayed Candace Jewel (the carpenter) on The L Word, season one.

What piece of advice can you share with aspiring writers?
Enjoy the beauty of working with language, and be true to your writer’s voice.

Why do you feel it’s important for black lesbians to tell their own stories, like you did with Leave of Absence?
It’s important for us to tell our own stories because we need to affirm our right to exist in the world and in the body of lesbian and gay literature. I have read so many lesbian-themed novels without seeing myself reflected on any of the pages. And many times we are not only invisible to the non-black gay and lesbian community. We are invisible to each other.

One thought to “S. Renee Bess”