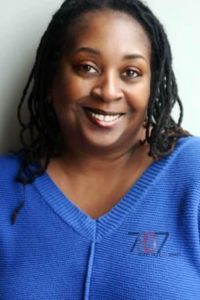 IN LA TOYA’S OWN WORDS…I am a lifelong resident of North Carolina who graduated from East Carolina University with a degree in journalism. While attending school, I joined the Lambda Mu chapter of Zeta Phi Beta Sorority, Inc. and served as second vice president for the oldest graduate chapter in the state while living in Charlotte. I have lived in all but two of the major area codes in the state of North Carolina. I have worked as a print journalist, business customer service representative for the fifth largest bank in the nation, and currently work for the State of North Carolina in the disability determination services division. I am an only child of an only child on my mother side, am the proud parent of a 9-year-old terrier known as Neo to his veterinarian and Shaky Shaky VonStruddel  to his family and friends. I had open heart surgery at the age of 5 which I fully recovered from but which left me with a charming scar I used to raise money for after school snacks in elementary school by charging people a quarter to look at it.

How long have you been writing and how did this passion begin?
I have been writing since elementary school, short stories, poems, and greeting cards. As a life-long reader, I know the impact of words. How they can educate, entertain, and enlighten those who read them. I decided my stories were just as good as some of the books I read. So, given I had space, opportunity, and desire, I decided to make a go of it. My mother really encouraged me and sent me to Duke’s Young Writers Camp during the summer before my senior year in high school. As a single woman working as a registered nurse, I knew it was a sacrifice. But she did it. If my mom has that much faith in me, then I owe to her and to myself to make it so.

Give a brief description of your novel, SBF Seeking.
SBF Seeking is the story of a 25-year-old Raleigh magazine writer that decides to satisfy her sexual curiosity by placing a personal ad to meet a white man four months before her wedding. That action sparks a course of events starting with her calling off her wedding and ends with her recovering from the heartbreak of the end of her first lesbian relationship. In between is a visit to an adult book store for the single working woman’s best friend in a box, coming out to her twin sister during CIAA weekend in Charlotte, and standing up to her mother whose life plan didn’t call for her daughter to be gay. She finds through all her high, lows, and in-betweens, the things she has been seeking, love, self-acceptance, and a good glass of iced tea has been hers all along in the form of her family and friends.

Describe Yvette, the main character of SBF Seeking.
She is someone who has went along with the program for so long without questioning “what if I do something different.” She has a sense of self she had not tapped into for most of her life and when she does, by placing the ad, she realizes there is so much more to her. She is a good sister, friend, and daughter who steps out on faith and to me, that makes her very brave.

Yvette’s coming out process came after a long relationship and subsequent engagement to a man. Do you think that’s typical?
I do think a lot of women fall into the groove of sticking with what works and what is expected. As a 40-year-old African-American Southern, it was expected that you would settle down with a man and have a house full of children. Doing that is safe and easy. It takes a special kind of person to say no go and chart their own path.

Between Yvette’s announcement to her family and her first relationship with Jasmine, do you believe Yvette was naïve at times?
I do. I think the way she leapt on Jasmine the first time they connected outside of the club and kissed her and the fact she came out to her family, at Easter dinner, after Jasmine and she had been together for a few months, shows Yvette doesn’t always think her actions through. I think she reflects the mindset of a lot of 20-somethings who thinks just because they are cool with it, everyone else will be as well. I think Sandi’s and her mother’s reaction about the issues of being LGBT as well as the advice she received from Linda and Danita served as reality checks for her about how life really can be when you embrace a different path.

Why do we tend to believe to our first love is our last love, as Yvette did?
I think our first love just elevates our senses to a level where time doesn’t exist like it does for everyone else. The only thing that matters is that person. An hour is like a day, a day is like a month, a week is like a lifetime. The feeling is so good you don’t want it to end because nothing has ever felt so good. You think, nothing can top the experience of finding “The One.” But, we all know, the first pair of shoes you try on is rarely the one you walk out with.

Do you believe Yvette will find her happily ever after?
I really do. I think at the end, when she is sitting down to brunch, she realizes she is OK and that she has what she really needs to get by and through anything that comes her way.

Is Yvette anything like you? Did you base her character on any of your life experiences?
SBF Seeking is semi-autobiographical. I did place an ad to meet a white man four months before my wedding and I did call my wedding off after a come-to-your-senses meeting with my mom. I was so bright-eyed about being a lesbian I did go on the massive shopping spree of all things lesbian. I didn’t buy the Lesbian-Already Perfect T-shirt but I did carry lust in my heart for it whenever I went to the local LGBT bookstore to buy something new. But, the twin sister, the friends, the first girlfriends are all fiction. My first girlfriend didn’t cheat on me, and my first girl crush was actually in high school. Yvette and I are alike in that we both realized you can’t live your life based on other people’s expectation. If you fail or fall, you have to learn a lesson, pick yourself up and go forward.

There was a lot of talk about black fraternities/sororities and HBCUs (Historically Black Colleges & Universities). Was that your college experience?
I went to a majority white campus and joined a sorority. At the time I attended ECU was 10 percent African American. The joke was you could name every black person by what dorm they stayed in/what team they played for/what Greek organization they belong to/if they sang in the Gospel choir. My mother and a lot of my family and friends went to HBCUs. I was actually set to attend NC A&T until circumstances resulted in me going to Greenville instead of Greensboro. I admire HBCUs staff and students and I wanted to be able to shout them out. I was deliberate in having the key characters attend HBCUs in North Carolina, JCSU, NCCU, Fayetteville State because we have great schools here beyond the ACC.

Is it difficult being a lesbian and being a Greek?
It can be because a lot of my interactions are with older members who aren’t comfortable with different expressions of self. However, I draw strength from sisters and brothers who care about the way I work for the organization rather than who I sleep with. I am active in a Facebook group of gay members of the NPHC and a lot of them have experience with isolated ignorance; but overall, if you are living up to the oath you took to join your group, it shouldn’t matter what you do and who you do it with. I have had negative experience with members saying homophobic remarks but overall, I would say for me, it hasn’t been difficult.

You worked as a regional reporter and a features editor for seven years. How was the transition from reporting real life to working on novels?
I had to expand my style to writing conversation rather than background. I was used to having quotes scattered here and there, but research carrying the story. Writing novels did require details but the readers want to feel like they know the characters. That is better achieved through having characters talk back and forth.

What are you working on next?
A novel titled, K-Rho: The Sweet Taste of Sisterhood. It tells the story of three young ladies who meet in college while going through an intake process for Kappa Alpha Rho Sorority, Inc. and the challenges they face as college students. I cover the perils of interracial dating, the pressures of dating a college athlete, and sexual violence. It then skips ahead 10 years to the girls’ life in Charlotte, NC, Washington D.C. and Quantico, VA and how while their lives have changed, their bond has remained strong. I’m hoping to have some portions published on my website, www.latoyahankins.com, by the end of this year.

What’s a typical day like for you?
I wake up, take my dog for a walk, work eight hours, then come home and work on my novel. As co-chair of Shades of Pride, I spend a lot of time planning upcoming Triangle Black Pride events, which happen throughout the year. Occasionally, my day or evening will involve fundraising or community outreach events. I’m in a relationship so I make sure to squeeze in some “boo” time. We live in different cities so mostly it’s the morning wakeup call or the nightly tuck-in while watching something on Food Network or Bravo. Chopped on Food Network just gives me life 🙂

What is your favorite book? Favorite author?
Tell My Horse by Zora Neale Hurston. She is my favorite author and Tell My Horse, with its’ narrative of life in Jamaica, Haiti, and New Orleans during the 30s, just fascinates me. She captures details about the color caste system, voodoo, and political upheaval in a way that just keeps me enthralled. I love the way she captures the native tongues without making the speaker seem backwards. This book is proof that sometimes reality is better than fiction. My mom kept me going in college by buying all of Hurston’s books and sending them in care packages. I have given that book away three times because I love it so much and want everyone to read it. I actually used passages from it during college in a political science class about Latin American and Caribbean politics and received an A because her observations were so on point.

What piece of advice can you share with aspiring authors?
Never doubt the value of your writing in whatever form you express it. That four-line piece you scribbled down on a sticky note while you were on hold could be the next piece of poetry that people quote like “Ego Tripping” or “Phenomenal  Woman”. Your words have worth and you should never get discouraged. Keep pushing that pen across the paper or typing the words on the screen.

Why do you feel it’s important for black lesbians to tell their own stories, as you did with SBF Seeking?
Because there is power is self-expression and you can’t let someone define what is your reality. I write because I am a black/Southern/Baptist/lesbian/Zeta and my life is multi-faceted and interesting. I want to give the world my take on what my life is like.