In our feature, Catching Up With…, Sistahs on the Shelf is pleased to to bring you updates on your favorite authors, ones who have new books or projects in the works.

Get cozy again with Fiona Zedde, whose new novel, Hungry For It, speaks of forbidden passions and what happens when you cross that line. 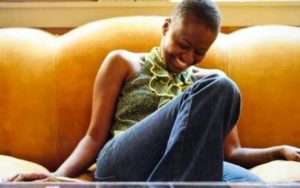 Who has been your favorite character to write out of the novels you’ve produced so far?
So far, it’s been Silvija from Every Dark Desire. She is so different from anyone I’ve ever written, known, or imagined that her character was a challenge and eventually a pleasure to create on the page.

What have you been up to since your last novel, Every Dark Desire?
A little bit of this and that. I finished the new book that the readers are starting to see on bookstore shelves now, but I’ve also taken on a new straight-but-not-narrow novella called “Sweat” that should be out in January in the collection Satisfy Me One More Time. I’ve also been outlining my new novel due out next summer. There are other things I’ve started but don’t know when I’ll get the chance to finish. Most days I wish I didn’t need to sleep so I could get more done.

When is your next project, Hungry For It, due out and how excited are you?
The official release date for the book is June 24, so it’s already available. I’m very anxious to see what readers think of this storyline and set of characters. With each novel, I try to do something a bit different and hope the readers go along with me and enjoy the ride.

Where does your writing inspiration come from?
My inspiration comes from all over. Women I meet. Stories I hear on the train or at parties. Other people’s fantasies and disappointments. Even things that I see in my day to day life. That’s one of the things I’m thankful for, always being inspired by the world.

Why do you think women have been so drawn to your novels?
I’ve been told by some readers that my stories and characters don’t fit any stereotypes, and that’s what they like about my work. Yes, there’s romance in the novels, there’s also erotica, as well as a good amount of girls behaving very badly. But there are also situations and elements that catch the reader by surprise and lure them into spending more time than they planned. I love that.

2 thoughts to “Catching Up With…Fiona Zedde”