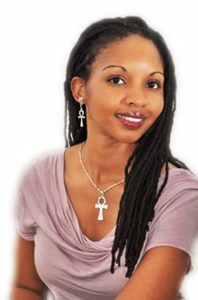 IN ETERNITY’S OWN WORDS…I like to think of myself as a woman of many talents. I am a creative writer of poetry and short stories, as well as a small independent publisher. I have a number of online shops displaying my own original designs that reflect my beliefs and my oddball personality. Lastly, I dabble in photography as a hobby of pleasure and have a photo art gallery. Older than most people my age yet a woman with a child’s heart, I am, essentially, a different breed, a unique aberration. I am Eternity.

Give a brief description of your book, Visions of a Cryptic Mystery: Vol. One.
Visions is an eclectic collection of poetry and short stories that reflects the passions and emotions common to Black lesbians.

How long did it take you to write Visions, and what kind of feedback have you received so far?
Visions was written over a number of years; a few of the pieces date as far back as high school! I would just write as the spirit hit me, and after a while I decided I had enough presentable work to publish a collection.

The feedback so far has been quite positive, from friends and strangers alike. But since I’m “brand new” it’s taking a while to break into the scene, really get my name and work out there. But slow and steady wins the race, I hear!

How did you come up with the concept of Visions, a mix of both prose and poetry?
When I was originally putting the book together the idea of having both poetry and stories just felt natural. I didn’t want to do one to the exclusion of the other, because I feel both types of writing balance and complement one another.

As for the title itself, I myself am a bit of a “cryptic mystery,” and my writings are an expression of me…my thoughts, emotions, passions…essentially, my creative “visions.” Hence, Visions of a Cryptic Mystery was birthed.

In Visions, you balance the storytelling as equally well as the poetry. Which one are you more drawn to?
Honestly I enjoy both forms. Poetry itself is a form of storytelling, and stories can be written with their own poetic beauty. That’s one of the reasons I love “Other Side of the Moon” so much. The imagery of the atmospheric orchestra is vivid and strong. That entire story has the tone of poem to me. Likewise, “Me an’ Da Lil’ White Boy” is itself a little girl’s story of her friendship, but it’s in poetic form. So depending on how the work forms in my mind, how much detail comes, the idea will become one or the other.

The characters you introduce are varied and self-assured. Did you base the characters on anyone you knew?
Actually, no, with the exception of the two in “Almost First Kiss”. In that one, names have been changed to protect the innocent, lol! But in the other stories, all of the characters are originals, born and developed with the stories as they are written. I try to make sure they are different from one another, very unique and recognizable. As a story goes on, I ask myself how so-and-so would react to this, feel about that. I want them to be themselves, and no one else.

Your poetry is so vivid and intense. Do you ever perform your poetry live in front of an audience?
I actually did my first poetry reading this past January, and was well-received. I’ve done a couple more since then, but I will admit that I need practice. I’m really more of a writer than a performer, but I’m trying to branch out a bit more to reach a broader audience. I have to learn to carry over that intensity from the paper to the mic. With time and practice, I’ll get it right.

Visions is divided into three sections titled Love, Life and Loss. Which has been the most significant event in your own life?
All three are of importance. Love is a major part of what makes life worth living, but we also know that we will not experience love without also experiencing loss in some way, be it through a break up, distance, or even death. Life itself is a dichotomy of good and bad, but without them both we wouldn’t be living. There are poems in the “life” section that reflect serious feelings of depression and hopelessness that were real to me and are real to a lot of people. All of these things, these experiences, make up who we are, are stones on our path.

What can we expect in the second volume of Visions?
Oh man! I’m hoping bigger and better pieces! There will be more haikus, and hopefully just more varying forms of poetry. I intend to make the book longer too, but other than that, I have no idea, lol! I can say that in all there will be three volumes; that much I’ve already decided. Either between these volumes or after them I’ll get a novel done.

In your author introduction, you compare writing to “giving birth.” How does it feel to finally give birth to the creation of Visions and share it with others?
It is such an awesome feeling! It’s like, “Wow, I did this!” I have a bunch of proofs lying around and every so often I thumb through it and think, “Someone somewhere might like this!” I’ve put myself, my creation, out there for the world to see, and I gotta say, I’m as proud as a mother of a real child.

What are you working on next?
I’m working a bit more on my publication company, Black Tygre Publications, to get to the point of publishing others. For myself, Visions Volume Two, as well as a novel.

What is a typical day like for you?
Well, I still have a day job. Or more specifically, a full-time job, since I work nights. Which is great for me, because I get to do a lot of my work at night. But honestly, my day isn’t all that outstanding. In fact, I started my publishing company and published my book on the side of my full-time job.

What do you do for fun?
I enjoy a certain poetry spot in Charlotte that has awesome performers and speakers, and is just uplifting for me as a writer. When I can I try to go to a symphony. I’ve also taken up photography and started an online gallery. I LOVE to travel, but unfortunately that’ll happen much less with the gas situation and skyrocketing airline prices. I just like trying new things. In fact, I’m going skydiving for my birthday next month!

What are your favorite books? Favorite authors?
My favorite lesbian-tale is Water in a Broken Glass by Odessa Rose. That story is just awesome, so passionate and emotional. I also enjoyed Nikki Rashan’s two titles, Double Pleasure Double Pain and You Make Me Wanna. But I read a variety of books and authors, so I can’t say I have any favorites. Oh, I do love the Boondocks comics. We didn’t get the comic in the local paper, so I’m just getting exposed to it, but I love the social satire and the knowledge.

Where do you see yourself in 10 years?
Let’s see…I’m about 25 now, so by the time I’m 35 I will have published all of my Visions series and at least one novel. On the professional side I hope to have a counseling degree and in that line of work full-time. It would also be nice to be married by then, or close to it!

What motivates you to write?
Just about any and every thing. A lot of my love poems in the book were specifically written because of my feelings for someone, just like some of the loss poetry was from my own heartbreak. But I don’t go by my experiences alone. Sometimes I’m just thinking random thoughts, or meditating on life in general. When I go hear other poets, that energy alone is enough to inspire me. Even riding in the car, looking at what and who I pass can spark a creative moment. So I just keep myself open to whatever may flow.

What piece of advice can you share with aspiring writers?
Write what’s in your heart, in your soul. Don’t force anything; just let it flow. And write as often as you can; whenever you get hit with something, write it down. Don’t let it go, because it may not come back. And don’t be afraid to love and hate your own work. Accept that not everything will be gold, but also have confidence in your craft. No matter what, keep writing.

Why do you feel it’s important for black lesbians to tell their own stories, like you did with Visions of a Cryptic Mystery: Vol. One?
Black lesbians, and lesbians of most any minority, don’t often see themselves reflected in gay culture. There is still so much racial division; just because something is gay or lesbian-themed doesn’t mean it will appeal to us. So we need to speak up, let our voices be heard, and tell society who we are, as both individuals and as women. We are so diverse, so complex, and yet we’re often invisible, unless you live in New York or Atlanta. But we’re all over, and by telling our stories we can better connect to one another and not feel so alone.

One thought to “Eternity Philops”