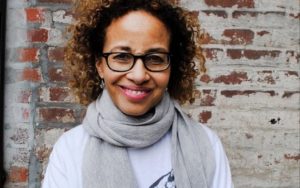 IN LINDA’S OWN WORDS…I am a writer, editor and author. In the early 90s, while a senior editor at Essence, I wrote “Coming Out.” In it, my mother and I wrote, from our own perspectives, what it felt like to be a lesbian/what it felt like to have a lesbian daughter. That article, a touchstone for many, changed my life. I’m also the author of Body & Soul: The Black Women’s Guide to Physical Health and Emotional Well-being and now Passing for Black, my first novel. I live in Brooklyn, NY with my partner Jana, our two children and our cat. For fun, I play on a recreational soccer team, I coach my daughter’s girls’ team and go fishing whenever I can. If you want to see pictures of the fish I’ve caught–plus other stuff–my website is, www.lindavillarosa.com

It seems like writing has a long-time passion in your life. How long have you been writing, and how did you get started?
I’ve been writing as long time as I can remember. I’ve always wanted to be a writer, since I was a little girl. I used to imagine myself living in the country, sitting in an attic room writing and, from time to time, looking out the window at the woods. Okay, Brooklyn isn’t exactly the “woods” but it’s fine for me.

Give a brief synopsis of your debut novel, Passing for Black.
My book is about Angela Wright, a young magazine editor who is engaged to a black studies professor. Her life is thrown into chaos when she falls in love with a woman. That happens early on, so the rest of her journey touches on identity, family relationships, love, friendship, sex, religion, and since it’s a black novel–hair.

How did you come up with the concept of for this novel?
About four years ago I got it into my head to write a novel. I had written so many stories in the voice of Essence and so many others in the voice of the New York Times that I had forgotten what my own voice sounded like. In person, I’m much more laid back and funny and much less serious than in print.
So once I made this decision, the characters and their situations–some of them really crazy–started coming into my mind. I knew that I had gotten into a flow, so I went with it.

How has the reception been so far?
The reception has been very good with the occasional cranky comment. I got a negative post on a black books website that said, “I had no idea your book was about lesbians. I am SO mad that I stayed up all night reading it!” ha ha. My cover is a little misleading, since it has Angela, but not the fiance or the love interest. I call it gay vague. But by page 3 the gayness isn’t vague anymore!

Tell us about Angela Wright, the conflicted heroine of your novel.
I like Angela. She’s unique, both conflicted and confused, but she manages to find her way and to assert her independence. In the end, I felt proud of her, for being true to herself.

What does Angela mean when she talks about “passing”?
I love the passing novels of Charles Chesnut and Nela Larsen, but didn’t want to write a historical novel.
So I put a modern day twist on passing. In my book passing for black is tongue in cheek. Obviously, Angela is sometimes hiding who she is; in other words, passing for straight. But because she feels caught between two worlds–the straight black world, and the LGBT that she’s new to–she feels as though she passing for black. That she isn’t a real black woman, that there’s a problem with her black authenticity.
And, of course, the transgendered women and men pass at various times. That’s interesting to me. Black people don’t pass for white anymore (I hope), but passing men and passing women definitely still exist. And they can sometimes pass for straight–or maybe they are straight!

Not only does Angela have to deal with coming out, but she has to contend with falling in love with a white woman. How do you think that complicated her coming out, especially with her family?
Falling in love with a white woman made it harder, like when Cait doesn’t understand that it’s not okay to call Angela’s mother–or any black woman of a certain age–by her first name. Looking back, I wish I had explored the race dynamic between them a little more.

In Passing, it outraged me to see the transgendered characters treated as outcasts, as the lesbian community rejected their attempt at inclusion. Why did you decide to incorporate their storyline in Passing?
I have started to see more and more discrimination against transgendered men and women from lesbians who should know better. Over drinks one night, my friend Toshi Reagon told me about how at the Michigan Women’s Music Festival security makes sure only women who are born women can come onto the “land.” So at the sex conference in my book, I put my own spin on that by having security banish transgender men and women to a “trailer.”
I wanted to bring up these issues, and personalize them. So I made Cait a radical, almost separatist lesbian feminist who is very political but thinks it fine–and right–to discriminate against those who aren’t women born women. I like Cait; she’s passionate but flawed…you know, like many of us.

You’ve documented your own coming out so publicly, writing an extremely personal article with your mother in Essence, which was one of the magazine’s most responsive stories in its 28-year history. Based on your experiences, what advice could you give to someone in Angela’s shoes?
Don’t keep secrets! Hiding who you are is difficult and stressful. It’s better to be honest about your sexuality with those you love and go through the often painful struggle that leads to resolution and deeper, more real relationships. And the more straight people that know they have LGBT relatives and friends, and understand us, the closer we become to achieving total acceptance in our society.

In your Essence article, you write that after coming out you had “to reinvent myself and the image of my life.” Do you believe that’s why Angela grappled with her sexuality?
Yes. She had to figure out who she was a woman, a black woman, a daughter, a friend, etc. It’s a good struggle.

Where do you see Angela’s story going from here? Do you believe her struggle is over?
Oh my goodness, she’s got so much more to deal with because now she’s a mother…a lesbian mother…of a son. I might check in on her in another book, but not sure yet.

Which do you believe it’s harder to stay true to: your ethnicity or your sexuality?
The goal should be to stay true to yourself. Your ethnicity and sexuality and gender are all a part of who you are. Once you start to compartmentalize–like Angela did at first and like we’ve all done–you cause problems for yourself. It’s worse when you put them into some kind of hierarchy or pit one against the other.

Do you ever believe it will be a time when homosexuality is accepted in the African-American community?
Yes. As more of us allow our loved ones to know who we are and understand our lives, the closer we will all move toward universal acceptance. It’s definitely happening.

As an award-winning journalist for such publications as the New York Times and Essence, has there ever been a story that you wrestled with writing, whether because of your race or sexuality?
My race or sexuality have never made stories difficult. I had a lot of trouble several years ago when I wrote a New York Times piece about convicted sexual abusers who were trying to make amends by becoming educators. Even though they were working to heal themselves and be forgiven, it was hard interviewing men who had abused young boys and girls, hearing their stories and writing a balanced article.

What novel do you see yourself writing next?
I don’t know yet. I’m waiting for a story to come to me. Maybe it’s Angela’s continuing story; maybe not.

What’s a typical day like for you?
I get up early and get my two children clothed, fed and off to school or camp. Then I work from 9 to 3. I divide my work into creative pursuits like my novel and writing and editing I do for money. I love all my work and am energized by it. Sometime during the day, I do something to take care of myself–go for a bike ride or run, go to therapy, meditate. Then after 3 p.m., I do homework with the children, cook, have dinner with my kids and partner.

What do you do for fun?
I love soccer and play once or twice a week with a co-ed meet up group. I also coach my daughter’s girls’ team. I love fishing, and try and go as much as possible. Most of all, I enjoy spending time with my family. I’m fortunate that my mother and sister live nearby. And every Sunday my extended family of friends and their kids, my god children, get together for a big Sunday dinner. I love that.

What are your favorite books? Favorite authors?
I love to read and have eclectic taste. I like both literary and popular fiction and everything in between. I just finished a wonderful book, Half of the Yellow Sun, a historical novel about Nigeria in the 1960s, as well as my best friend’s book–After Tupac by Jacqueline Woodson. I also read two novels by lesbians, The Child by Sarah Schulman and Biting the Appleby Lucy Jane Bledsoe. Next up, I’m going to read E. Lynn Harris’s Just to Good to Be True, Leaving Atlantaby Tayari Jones and Hungry for Itby Fiona Zedde. I just hung out with Zane at a conference, so I ordered Purple Panties.

You’ve accomplished so much in your illustrious career. Where do you see your work taking you from here?
My goals are balance, freedom and happiness. I’ve worked very hard throughout my life, because I’m passionate about journalism, LGBT and black issues. But I was so driven that I also struggled with stress and burnout. Now I want to take good care of myself and my family and also write books and articles that help people and create change.

What motivates you to write?
see above 🙂

What piece of advice can you share with aspiring writers?
Read books that make you think and feel and write as much as you can. Writing is a skill; the more you do it, the more you improve. Writing is an important form of expression, a gift and a right–whether you journal for you own growth or you’re a published author.

Why do you feel it’s important for black lesbians to share their own stories, as you did with Passing for Black?
Sharing the stories of our lives increases understanding and acceptance.