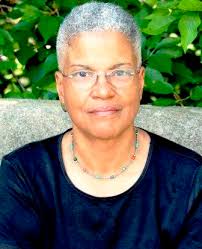 When did your passion for writing begin?
I always liked to write. Fortunately, I had an education which put great emphasis on writing and reading. I always got good grades in English and penmanship. The two go together for me and always have. I love letter-writing and writing greeting cards. Even though I use word processing incessantly, I will still usually begin a poem by writing it out long hand. I enjoy that. That is still rather a passion. When I was in college at Howard University, in the “midst” of the Black Power/Black Arts Movement, I witnessed the efficacy and force of poetry as education, history, action. I began to study “blackness,” and by “blackness” I mean the contributions and consciousness of African American people in the U.S. I learned early of its richness through literature, another source of creativity and inspiration for me–and it still is. So, I began to write poetry which was of a narrative style that commented on my ideas of “blackness.” Also bombastic, as the poetry was then. I admired such poets as Nikki Giovanni, Sonia Sanchez, Gwen Brooks, Etheridge Knight, Everett Hoagland, Haki Madhubuti, and of course the late Amiri Baraka/LeRoi Jones, and many other poets. I was also part of a writers workshop for two semesters that had been started by a professor in the English Department, a white woman actually. We would meet at her house in Chevy Chase on the weekends and share our work. This was a great impetus and helped me begin to identify as a poet and as a writer because of this community. This experience showed me how to put myself out there, as it were, and it also showed me the importance of audience, of knowing one’s audience. So, I began to write in earnest in the late 1960’s. I involved myself in readings around town when I came to New Jersey to do graduate work at Rutgers University in New Brunswick. Everyone was politically involved at that time. So, there was much activity that could use the services of poets. These experiences helped me evolve into the black lesbian writer I became in the 1980’s. I still write everyday–not always poetry, but other things like grant proposals, essays, journaling, and poetry. I belong to a trio of poets and we write a poem a week and put it out to each other and give feedback, which reminds me I am two weeks behind.

Originally published in 1986, Living as a Lesbian is a classic black lesbian work. Describe Living to a new generation who might not be familiar with your book.
I am very happy that Living has been reprinted by the energetic Sinister Wisdom and A Midsummer Night’s Presses–they keep me going and all of us going. And your Sistahs on the Shelf is so important to lesbian readers of all generations, especially black lesbian readers. As I said above about the Black Power/Black Arts Movements: we need our history, our culture, our literature. And this is what a whole multicultural generation of lesbians engaged in in the 1980’s–creating cultural institutions so that we could live our lives with determination, decision, and yes, of course, pride. (You gotta be careful of that “pride,” it can so easily become arrogance or complacency.) So, I would say this to a “new generation.” Read Living. You may not think it is wonderful in the world, but you will know that the work is out there and that you are a part of its audience.

What was the initial inspiration for the poems in Living?
At the time I felt that a sexual language needed to be developed for lesbians. So, I suppose the absence of a lesbian poetics of sexuality, except for Audre Lorde’s The Black Unicorn, motivated me to try my hand at explicit lesbian sexual language. This book also attempted to showcase whatever hand I had at writing in classic European forms–like sonnet, villanelle, ballade, epitaph, sestina, etc.–as well as my usual narrative realism. I would ask new readers to also examine the politics of the book. What does it reflect of its time, 28 years ago; and what does it say to contemporary times; and what do contemporary times say to it? If you like the work or find it useful, pass it on, teach it–and not only Living but other works by diverse lesbian writers, including black lesbian writers. My inspiration for writing is genuinely other writers–reading them and talking to them and knowing that they/you are out there. What I am saying here also applies to you, Sistahs on the Shelf, putting us, black lesbians, out there on the net. Continuing our cultural legacy in new media. Thank you.

I appreciated that Living included notes on the context of the poems. Why did you include them? What reflections did you have while writing them?
I’m happy you asked this question. I was resistant to it at first–doing more extensive notes. I feel readers should be free of the intervention of notes, particularly for poetry. But I always admired how Adrienne Rich’s notes were placed: at the end of the main text, according to poem, without the annoying superscript in the middle of the page, at the foot, or at the end. And I loved the ways Junot Diaz radicalized their usage in The Brief Wondrous Life of Oscar Wao–as a kind of subtext and subconscious. So I got into it. Writing the notes made me roam my own intellectual terrain from 1976-1986. I had to re-invent the times via the poems, memory, and the tenacious world wide web. But the notes called for a kind of realism, I didn’t know if I was capable of, a kind of honesty I didn’t know I could call up. The notes also presented the challenge of documentation, another form of honesty, that commented on my ideas of “blackness,” which I’d rather not undertake for the most part. As I said in the book, the notes are “as much for myself” as for readers. I have to say, I am still committed to many of the issues which propelled Living as a Lesbian into the lives of 1986 dyke readers. The notes made me “reflect” upon my work and my practice as a lesbian and a feminist, my involvement in its cultural production, the many places to be at once, the staying up late, the travel, the publications.

Explain how music, most especially jazz and R&B, was an immense part of your poetry in Living.
I’m listening to Carla Thomas right now–the Stax Sweetheart or more formally known as the “Queen of Memphis Soul”–as I am writing. I spent my pre-teen and teen years imbibing Rhythm and Blues–on the black radio station WOOK in D.C. Still I spend my life trying to achieve its elegiac lyricism, or what LeRoi Jones calls its “missed love.” So, I felt like I would try to honor the forms of black music, including Jazz, Blues, and Rock ‘n’ Roll, in Living as a Lesbian by alluding to it through lyrics, riffs, repetitions. I was listening a lot to Joan Armatrading at the time.

The 1980s was a significant time of creativity among lesbians of all colors, most especially with black feminist writers such as Audre Lorde and Barbara Smith. What was it like being among the black feminist-lesbian authors and arists in that era?
Knowing that black feminists writers and artists like Audre Lorde and Barbara Smith were working shoulder to shoulder with us in revolutionizing social-sexual-political relations made the “practice” seem more doable and necessary; gave us confidence; educated us; gave us community; made us write and create.

Have you ever cared about what the “mainstream press” said about your work?
I have always tended toward publication in the independent presses and literary institutions. And I still do. Poets tend toward a different route than prose writers, because of the nature of the forms, among other commercial reasons which are far too numerous for me to say. If I wish (and have the energy), I can self-publish and hand my work around at public events, especially at readings. Of internet sources are far too numerous for me also to know. However, in speaking of the bourgeois liberal mainstream, I’d love to have a poem in The New Yorker. I can imitate all of the forms they tend to publish.

Do you feel there are any young “rebel lesbians” doing their thing today?
Well, yes. They might be called “black queer trouble-makers.” But I won’t get into cataloguing names, because I will inevitably leave some out. Many of the writers on your shelf.

How far do you feel black lesbians authors have come in being recognized?
Not far at all, except by our own communities. Of course there are individual black lesbian or queer women writers who have come to mainstream attention. No cataloguing of names.

You say in Living’s afterword that, “We still have much work to do.” Tell us what more needs to be done.
Of course, we are not doing enough for our young people because the challenges are so immense. I cannot presume to tell us what needs to be done. Look around you, close to home, figure out where your talents and skills can be utilized–LGBT or otherwise.

Is gay marriage an important issue in our black LGBT community?
Same-sex marriage is as important to the black LGBT community as it is to any same-sex community. We should not be sentimental, nostalgic, romantic. We must be practical. Also, just because we can be married and coupled off somewhere, does not mean we must give up honoring our other forms of relationships and families and communities.

Are you working on any new material currently?
Yes, I am always working on a manuscript of poetry, alternately called Corridors of Nostalgia, Baltimore Aureole, and at the present called By My Precise Haircut. I may self-publish the manuscript. I am working with Trinidadian lesbian poet Cheryl Boyce Taylor to put together a manuscript of our poems which we wrote over a series of Sundays between 2011 and 2012. I am always writing or revising my poetry. I hope another prose project is awaiting me.

What is your favorite book? Favorite author?
My favorite book at this point is Proxy by R. Erica Doyle. No favorites.

What piece of advice can you share with aspiring authors?
Develop a body of work.