Revisit with S. Stephens, whose latest book, Between Right and Wrong, takes us back into the life of Elise James from her 2005 novel, Am I My Sister’s Keeper that followed Elise’s heart-wrenching coming out to family and friends. Between Right and Wrong finds Elise balancing her dramatic love life while still taking care of everyone she loves. Read on to learn more about what S. Stephens has been up to in the eight years since her debut novel. 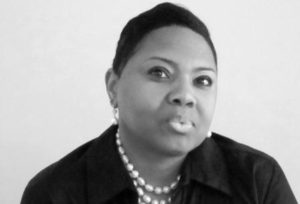 It’s been eight years since Am I My Sister’s Keeper. When we left Elise James, she was trying to get her life right after being married to a man while in love with a woman. Where is Elise James now in the sequel, Between Right and Wrong?
Elise is still family focused. The only difference is, she’s doing whatever she wants to do in her relationships. A part of her wants to commit, but that dark side of her is afraid due to her past issues with relationships.  Basically, Elise is still drama filled Elise only wiser and stronger. She no longer has a government job, she‘s now working for the private sector and making as much money as her heart desires. She‘s still the rock for her friends as well. She may even settle down or will she?

What made you revisit Elise’s story?
Elise is such a strong character in this novel. Many people reached out to me wondering what happened to Elise, her friends and the James’ family. After receiving so many thank you emails for sharing her story. I quickly realized many readers related to her struggle of finding yourself and totally surrendering to love.  I felt it was necessary and a sign to have Elise and the James’ family continue their journey. The sequel to Am I My Sister’s Keeper was actually written in 2008. It wasn’t designed to take eight years, but my computer crashed; I lost everything without a backup (very depressing).

Just like in Sister’s Keeper, Wrong finds Elise still being everyone’s shoulder to lean on. Why do you think she sacrifices romantic love for family and friends?
She stands strong for her family and friends that’s how she was raised. Her love for God and family keep her grounded. However, she battles her own morals and values at times. Because she gives so much of herself to family and friends she takes what she wants out of relationships. She knows long-term love is the right thing to do. But, I’m not so sure she’s really interested in long-term love at this time. It may appear she’s taking advantage of her romantic opportunities and she may even appear to be an opportunist. However, she is very caring and has a loving heart.

How healthy is that?
Elise’s life may appear unhealthy to some. However, many people sacrifice romantic love all the time.  Some may sacrifice for work, religion, family or any other reason that will keep one away from romantic love. The characters in the novel all had to sacrifice love at some point. Because of fear, Elise continues to sacrifice finding true love again and total commitment.  But, that doesn’t mean she does not enjoy her moments, she lives for her moments! She continues to love the lord, her family, work hard and play hard.  Some may feel Elise’s life is not healthy but who is one to determine what’s healthy for another?

In Wrong, there was a lot of talk about bisexuality and discovering one’s sexuality. Considering most of the characters were in their late 20s and 30s, do you think it’s easier at that age to come out?
Unfortunately, the characters in Wrong did not struggle with bisexuality and discovering themselves because of their ages. They struggled against society, family and religion. I read about the same struggles in the thank you emails I received from parents and mid age readers.  The fear of rejection and judgmental comments hinder many individuals from coming out.  The same fears, love of family and fear of rejection from the Church did not allow the characters to show their truth. I don’t think it’s easy at any age to come out if you have no support from the people you love. There are people today still discovering themselves in their 20’s, 30’ and 40’s. The important thing is that you figure it out and begin to live your life to the fullest!

How often have you been between right and wrong?
Sometimes we put ourselves in situations where we know what’s right but still make the wrong decision. Between Right and Wrong is about choices and predicaments.  At this time and space in my life I better know the difference between right and wrong. But I’ve definitely made some mistakes on a few occasions.

Is there going to be a continuation of Elise’s story?
Yes, one more book. Elise continues on her journey seeking true love. She will always be there for her friends, family and her God.

What have you been up to between books?
I’m in the process of implementing a few grant-funded work related projects. I’m also, recuperating from two surgeries and ongoing physical therapy. Through it all, my main responsibility has been and always will be to take care of my loving and supportive wife and daughter.

So what’s next for you?
I’ve learned to enjoy life and embrace the love and support from friends and family. With all the love, support and blessings received, I’m hoping to have the next book out by early next year and hit the road with my books, my love crew and the Lord’s blessings.