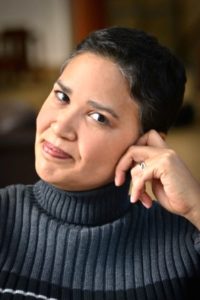 Nikki Harmon, a native Philadelphian, received her BA from Wesleyan University, then returned to Philadelphia to pursue a career in television and film production. She earned her MFA in Media and Film Arts from Temple University. In addition to her career in video production, Nikki teaches as an adjunct professor. When I Was Your Girlfriend is her first novel. She is currently working on a feature-length screenplay and a second novel.

IN NIKKI’S OWN WORDS: Interesting tidbits … wrote that book in 2011 in desperation to reclaim some kind of creative life after having 3 children.
… dropped out of high school typing class, which I regret, regret, regret more than anything else.

…wrote lots of dark short stories in high school and was worried about being called down to the counselor’s office.

How long have you been writing and how did you get you get started?
I used to write short stories in high school and then I got into photography. Just as I was graduating college, I got into video production and decided to pursue that because it combined writing and photography as well as a host of other skill sets. So when I started to write again, it was scripts for short films, then scripts for grad school assignments and finally a script for a 30-minute film that I eventually produced as my thesis film. But write a novel? That came as a whim. I saw the NaNoWriMo Challenge somewhere on-line and I decided to do it. I figured I could ignore my partner and children for a month, and nobody would really remember it. Also, I work better under deadlines and pressure. And I like a challenge. So, I wrote the book, racing through it, learned a lot (like how I should have had an idea before November 1) and almost made it. It’s a 50,000-word challenge. I had like 48K something but I was still happy. I finished the book by the end of January and then put it away for three years.

WIWYG (as she is now affectionately known) has been a weird and crazy ride. Probably the weirdest thing is to make up a story, and all these characters and this plot and then have actual people actually read it. For so long, I had no idea if it was any good at all. You know how you might put on an outfit and think you look sharp but then when you go out, your friends are like, hmmm. In your head, you were all Janet Jackson, but in reality … Honey Boo Boo. Anyway, I was worried that would happen with the book. I liked it but it took a lot of people to say they liked it before I was willing to do anything about it. And a lot of my lazy friends didn’t finish it, so I thought they didn’t like it, when in fact, they were just lazy.

Tell us about your debut novel, When I Was Your Girlfriend.
The real reason I wrote this book was because I was so frustrated with reading choices. I used to travel a lot and I liked to read on the plane and in the airport. Sometimes I just wanted something light and breezy and fun to read … about other black lesbians. And I just couldn’t find it. Nothing sad, or about abusive relationships and I don’t like mysteries, so just some interesting but fun beach reading.  Of course, had I known about your website, I may not have ever written a book, so I guess that’s a mixed blessing.

How did the concept for this novel come about?
I wanted to write chick lit for black lesbians. I wanted a love story and a happy ending. I also, have led a fairly interesting life so I have lots of experiences to draw upon, like going to an all girls’ school public school, for example.

Describe the main character, Dee Armstrong.
Dee … I ain’t gonna lie, grew up like me, in a decent middle class neighborhood, without any significant racial or economic challenges, at least to her knowledge. She went to the high school I went to, she knew the girls I knew and she had some career ambitions. After that, she became her own person. She was lucky. She found and knew a great and loving relationship before she became an adult. She just messed it up. Badly. And that mistake cost her and changed her and hopefully, she’ll recover from it. I like her confidence. I like her sex positive attitude. I think she might have more stories to tell.

One of the things I loved about Girlfriend was the passion Dee has for her career as a midwife. Why did you choose that profession for Dee?
Two reasons. First, I wanted to be a midwife from the age of 12, then an obstetrician when I realized how much money midwives didn’t make. Then in college, I changed all that and decided to be a filmmaker. Second, I had midwives for both of my pregnancies and I believe they are usually the best option for pregnancy and birth.  I have a lot of love and respect for the professionals who do that work. It is truly miraculous work everyday and they do not get the respect or recognition that they should. What could be more important than bringing a new life into this world safely and with the joy and reverence that it is due? My last midwife proofread the midwifery parts for me and gave me notes. J I loved her!

Based on the concept of your novel, do you think love lost can be rekindled, and have you ever revisited a lost love?
I think true love doesn’t die even though you might move on. I had many intense relationships when I was younger and even though I wouldn’t want to get back into those relationships, I still feel very strongly about the people. I still love them, or my memory of them or the relationship we had. It’s still there, and I could call it up but I guess I just choose not to dwell in it. I don’t think I ever went back to a lost love but, of course, I am friends with just about all my exes.

Do you envision a happily ever after for Dee and Candace? Would you ever revisit these characters?
Happily ever after? Maybe but what fun would that be? I was thinking about revisiting them in another book but maybe more from Candace’s point of view. Actually, now that you mention it, I have an idea …

Nikki, you worked for three seasons of TLC’s A Wedding Story as a researcher, associate producer and finally as a producer. Yet you also teach as an adjunct professor. Which hat do you prefer wearing: producer or educator?
Prefer?  Well, I really like both. Both jobs give you a great sense of satisfaction at the end of the project or the end of the semester. And they are connected because everything I learn producing, I ultimately pass on to my students. Teaching, however provides me with more time and flexibility to do independent work and actually spend time with my kids. It’s been a blessing. But I do miss the adrenaline rush of going out on shoots, and the whole process of pulling a show together from pitch to edit. I had some great adventures producing and met a lot of really great people.

Mt. Airy Girl Press is a business you began as a way to publish your own books. How important was it to do this for yourself? Where do you envision this company in a few years?
I started Mt. Airy Girl Press so I could own my ISBNs and because frankly, I didn’t want to go through what seemed like a very daunting process to try and get published. Especially when it might not be a sure thing. I was thinking my audience demographic was pretty small and no one would take a chance to publish me. So, I did it myself and it was HARD!!!!! But I did it. I do have more ideas for books and now that I have some idea of what I’m doing, I hope to put them out. Of course, I would like to expand to films. That would be awesome!

What are you working on next?
I just finished a script version of When I Was Your Girlfriend and entered it into a screenplay competition. It probably won’t win but I really needed to do that for me. I also have another book that I’m 2/3 finished writing. I really want to see what happens at the end so I’m getting back to it this spring.  It’s more SF, which I love so I’m really digging the story.

What’s a typical day like for you?
Get up, get kids off to school, try to work on “business,” go teach, try to do some writing, homework with kids, dinner, kids to bed, maybe write, maybe watch something, stay up too late, regret it in the morning. Repeat. Crazy boring, I know.

What is your favorite book? Favorite author?
Favorite book? Ooh, that is hard. Soul Kiss by Shay Youngblood really moved me. I loved that book. Also, I just read Who Fears Death by Nnedi Okorofor. Really loved that and can’t wait to read Binti. Favorite author – probably Jacqueline Carey. I’m a big fan of the Kushiel Legacy series and Naamah Trilogy (Moirin’s Trilogy). I read all nine books, multiple times.  Of course Alice Walker, The Temple of My Familiar changed my life. Oh, I also love Gabriel Garcia Marquez and Jorge Amado. And Stephen King – the Gunslinger series!!! What!!! Ok, I could go on for quite a while. I don’t have a lot of time for reading. I actually went quite a few years when the kids were little without reading anything but kids books, which were pretty good, but still …When I got back to being able to read for myself, it was like coming home. I didn’t realize how much I missed it.

What piece of advice can you share with aspiring authors?
Advice? From me? I think I am still an aspiring author. If you enjoy it, do it. But for heaven’s sake, try to get a publisher because that self-publishing … man, that was rough for me.

Why do you feel it’s important for black lesbians to tell their own stories, as you did with When I Was Your Girlfriend?
If we don’t do it, who will?